Holidays to Barbados are a cocktail of swaying coconut palms, sugar-soft sands and calm turquoise waters.

ABOUT HOLIDAYS TO BARBADOS

Holidays to Barbados are the stuff of glossy mags and smug holiday postcards.

If you’re after some serious pampering, it’s the place to be. Compare deals today and save UP TO 70%!

English is the official language of Barbados.

The average flight time to Barbados from the UK is 9 hrs. 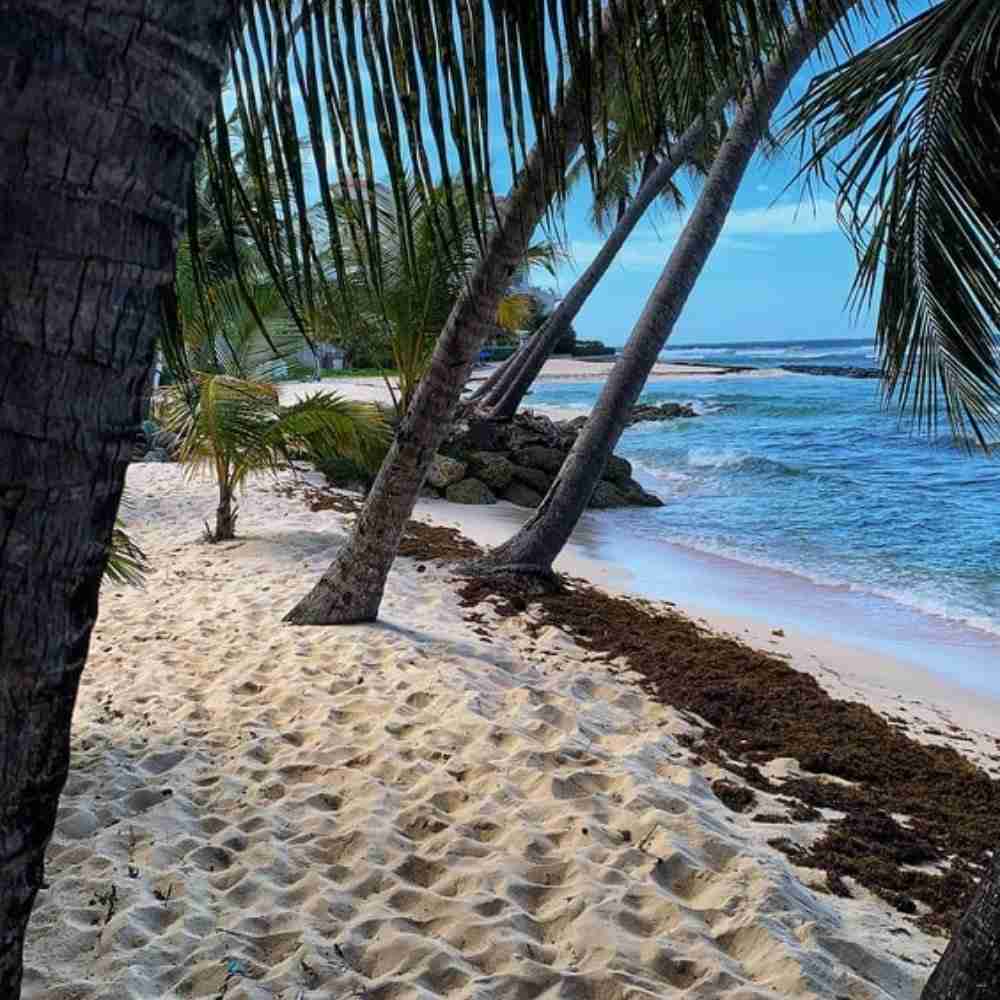 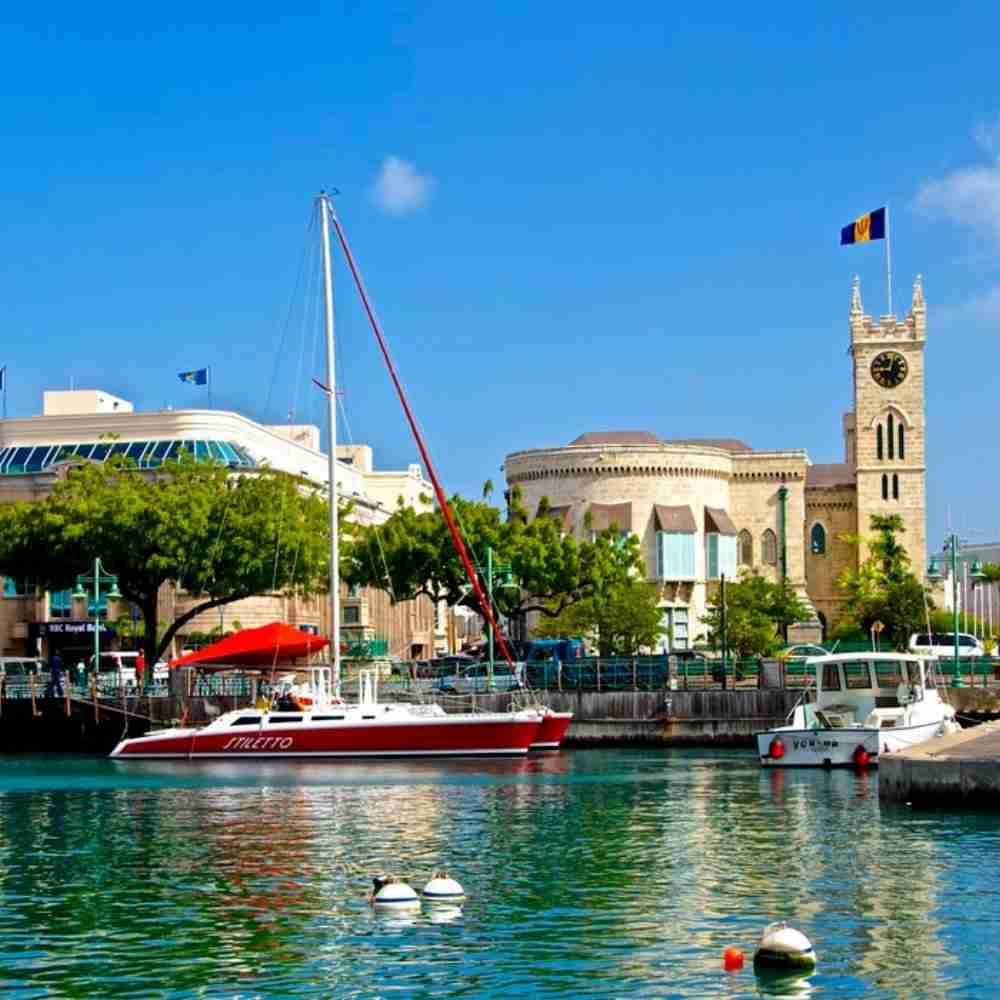 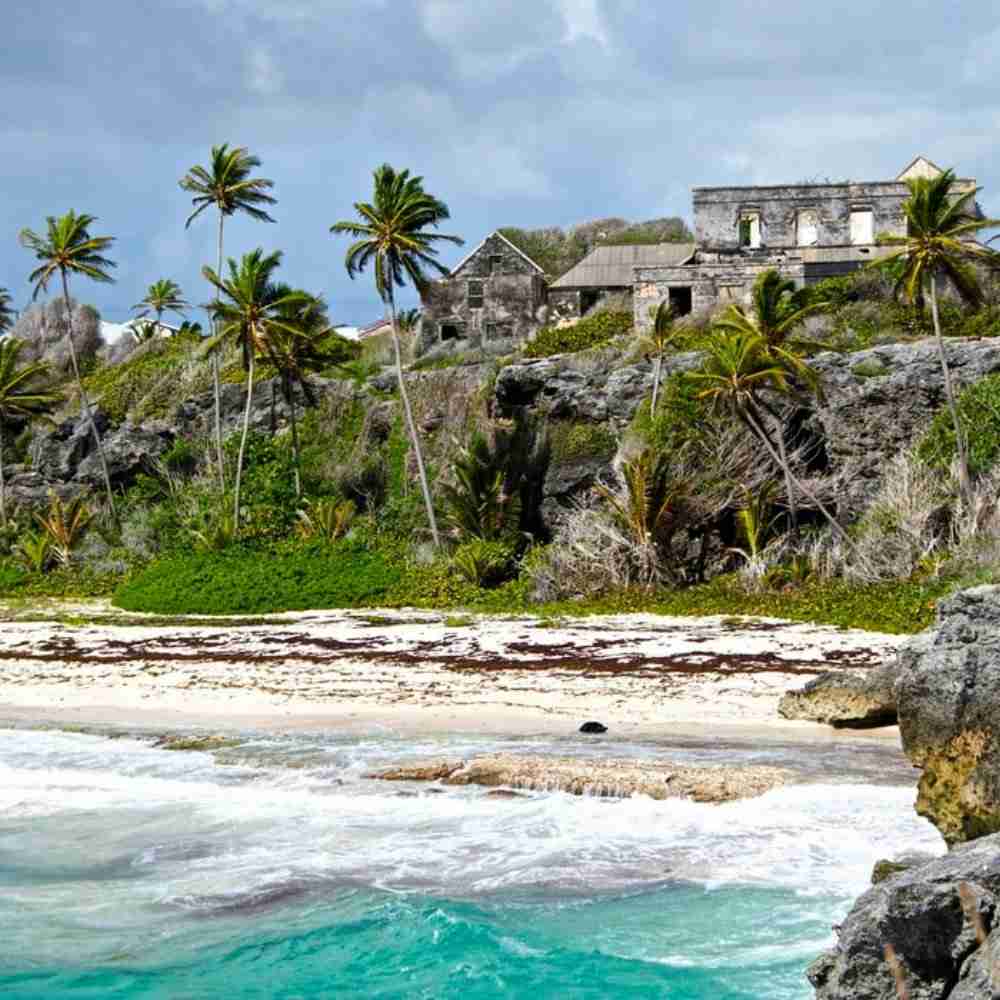 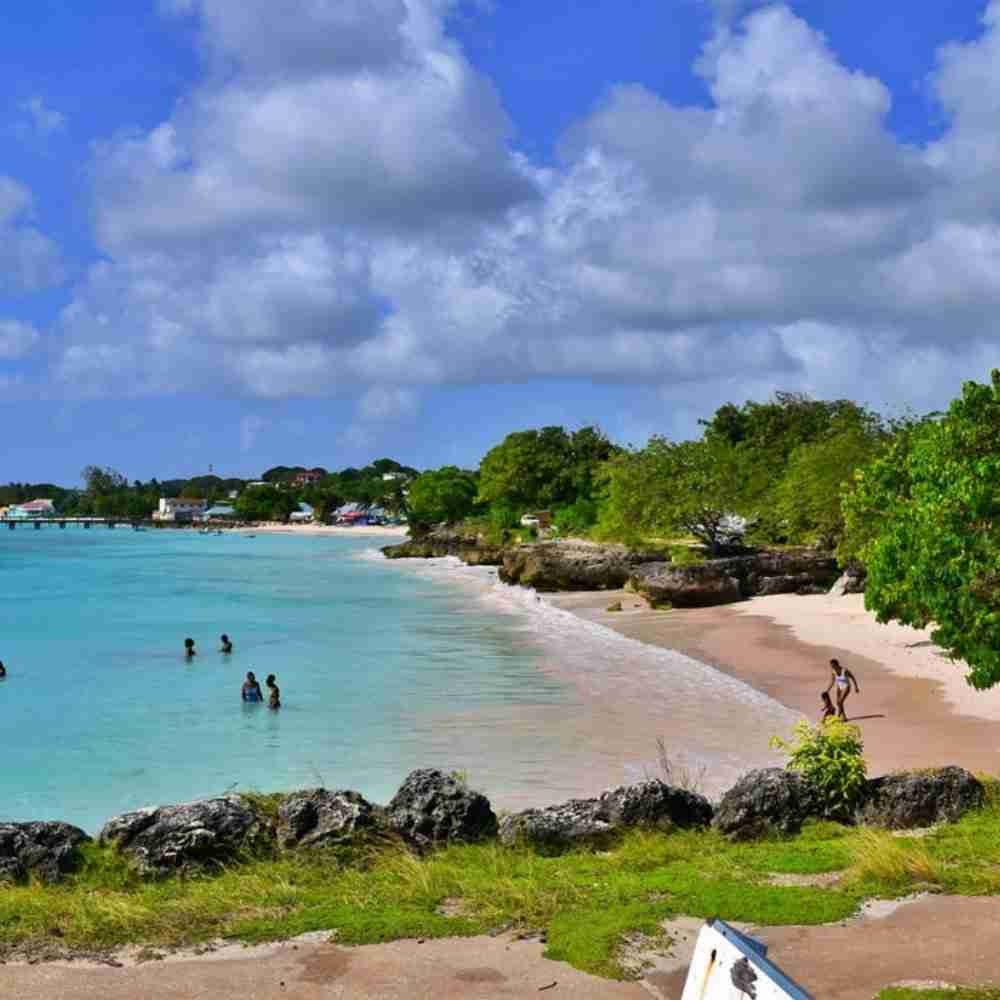 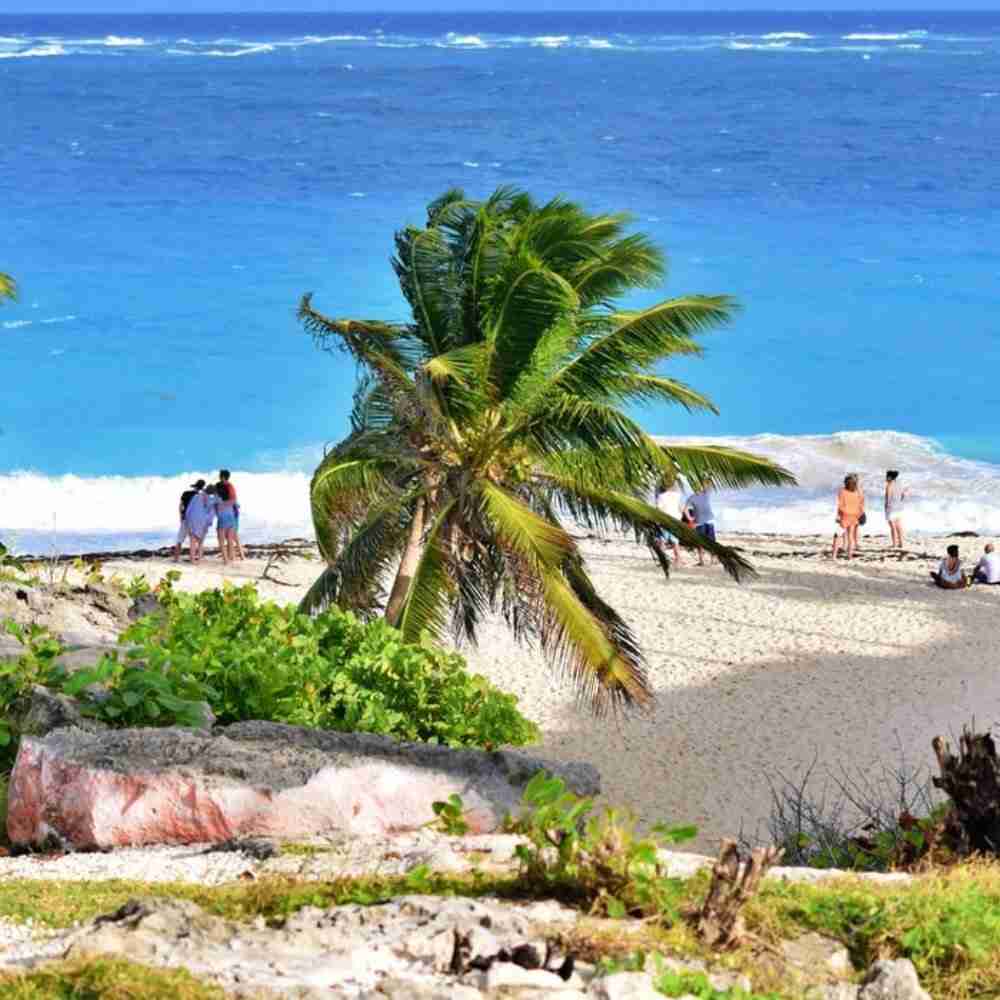 The wind-battered Atlantic east coast is a different story, with steeps cliffs and roaring waves that draw flocks of surfers, boogie boarders and water-sporters from all across the globe.

A paradise with proper tea

What’s more, holidays to Barbados are almost like visiting a tropical home-from-home. A former British colony, afternoon tea and village cricket are island institutions from days of old. There’s even a Kensington Oval, where locals cheer on their team with an ear-pounding mixture cymbals, conch shells and tin cans. Once dubbed Little England, it’s paradise with proper tea – what could possibly be better?

Head inland for a different view of the island

If you’re up to wrenching yourself off the beach for an hour or two, there’s far more to Barbados holidays than sun, sea and sand. The edges are undeniably gorgeous, but heading inland you’ll get a totally different take on Bajan scenery.

Here you’ll find a staggeringly beautiful patchwork of sugar cane plantations, lush gullies and underground caves complete with tumbling waterfalls. The island is just 21 miles long and 14 miles wide, making it a breeze to get out and explore.

Bajan culture is lively, colourful and Caribbean through and through. With big smiles, warm hearts and high spirits, the locals are larger than life. Tap your feet to the kettle drums and penny whistles of a traditional tuk band, feast on a mind-boggling assortment of seafood fresh off the fishing boat and visit the local rum distilleries for a tipsy tour of island history. There are all kinds of things to get up to on a Barbados holiday. Dive straight in.

The best time to go to Barbados

For sun-soaked day after sun-soaked day, the best months to book your Barbados holidays are December to April, when rainfall dwindles and the humidity eases off.

Hurricane season begins in June and runs until November, although the island rarely gets hit by damaging storms. Prices plummet over this period, and if you don’t mind a few soggy days then it can be a great time to catch a deal.

A sneaky hack when booking holidays to Barbados is going in either May or early December. These months represent the book-ends of high season, and you can find top deals without sacrificing on sun. The weather in Barbados in December tends to be a little cooler than previous months, and a lot drier.

Things to do and see in Barbados

If you can drag yourself away from your sea view and rum punch, there’s plenty to do on this beautiful island. To help tempt you to see more than your sunlounger, here’s a round-up of the top five attractions in Barbados.

Lying lonely and forgotten for almost 200 years, Harrison’s Cave, in the heart of Barbados, was stumbled upon by a local man and Danish cave scientist in 1974 before it opened up to the public in 1981. Electric carts now whisk visitors on a mesmerising subterranean journey of giant stalactites and stalagmites, ancient lakes and tumbling waterfalls.

Meltingly-soft pink sand, swaying palms and rolling dunes, the former harbour of Crane Beach is easy on the eye to say the least. Surfers, boogie and body boards frolic in the waves, and the whole rather delightful scene is protected by a coral reef.

There’s public access from the road near Cutters Bajan Deli or you can pick up a day pass at The Crane resort.

Skipping over the sparkling waves on a boat tour is a fantastic way of taking in a host of Barbados’ mesmerising vistas in one afternoon.

Book a romance-inducing sunset sail, a sun-filled daytime catamaran cruise, or hop aboard a diving or snorkelling excursion for some watery action.

Another popular option is the Atlantis Submarine: a fully submerged and narrated tour with portholes giving a window into a hidden marine world of shipwrecks, exotic fish and colourful coral.

So-called for its resemblance to the foamy milky bath of Bathsheba, wife of King David in the Bible, this is a surfer’s favourite – thanks to the Atlantic breakers crashing on to this beach.

Known as the Soup Bowl, this area is the place for gazing in awe at the feats of adventurous surfers – as well as delving into the delights of local rum shops, of course.

The island’s lively little capital offers a lovely clutch of attractions, such as the UNESCO World Heritage Site of the historic Garrison area, rum tastings at Mount Gay Visitor Centre, and pleasant shopping along Broad Street or in Pelican Craft Village near the cruise terminal. (Do note that opening hours can be sporadic).